In the writing of this series, I came to discover that the Adinkra symbols represent one of the oldest forms of technology. They serve to transmit ideas by merely looking at them because they all mean something.

In Ghana, Adinkra symbols are a part of everyday life. They are found in homes, churches and on clothing. That was what led to my seeing them and eventually this series.

I found beauty, minimalism and symmetry at the heart of the Adinkra symbols. In the reading of this series, I hope that you too see it for yourself.

In the writing of this series, I also realized that the Adinkra symbols depended on each other. Once you could draw certain symbols, you could extend that commonality to others.

In this series I covered how to draw 23 out of the 63 Adinkra symbols that are found in this list using the Python programming language. They are 63 symbols in all but the Sankofa symbol has an alternate version. You can see both of them here: 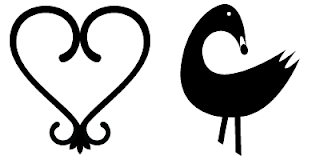 In my opinion, I prefer the bird as I am drawn to it. The meaning of Sankofa is to learn from the past.

Look through the list and pick out a symbol that appeals to you. I take the Aya as my personal symbol because it tells my own story and in some ways the story of this series.

The Aya is the symbol of endurance and resourcefulness. An individual who wears this symbol suggests that he has endured many adversities and outlasted much difficulty.

The Aya symbol is shown below: 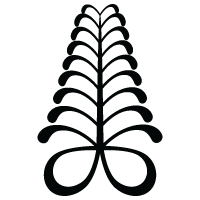 This series represents 9 months of hard work. I have passed through a lot so I am grateful that it is finally concluded.

In due course, I will release a book. But for the moment, please take time out and read through the series.

Thank you for reading.
Posted by Unknown at 01:57